These past few months I’ve been on a quest for the ideal powdered protein source – a journey that has taken me over some very peculiar terrain (ground-up crickets, anyone?).

Why? Well, I’m a bit of a perfectionist, and while rice and whey protein are pretty hard to argue with, I really want to find the best. And I like experimenting. If I’d never bought some rice protein at the store on a whim, I’d still be using whey protein isolate for everything, and then there would be no Schmoylent. And that would be sad.

Especially for vegans. Because rice protein is vegan, and tastes pretty good, and is pretty affordable, but it’s not the most balanced protein source out there. It’s a bit low in the amino acid lysine, for example. And it’s got a lot of cysteine and methionine, so the so-called sulfur-containing amino acids, which can make for a very… volcanic experience on the way out.

And so it goes. Each protein has its own drawbacks, it seems. 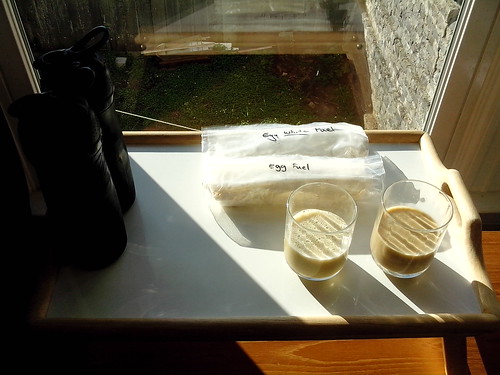 Which brings me to the subject of eggs. Did you know that there is such a thing as powdered eggs? Would you be surprised to hear that this technology is actually more than a hundred years old, according to Wikipedia? It was used extensively in World War II.

I bet you could make a powdered drink mix out of that. And not only can you get powdered eggs, you can also just get a powder of the egg whites. Turns out that’s a highly concentrated, complete protein source comparable to whey protein isolate.

Of course, it’s way more expensive than whey. Like easily three times the cost. And that makes a big difference when it comes to protein, because protein is the most expensive ingredient in almost any dish, Schmoylent included.

So why would you use it? 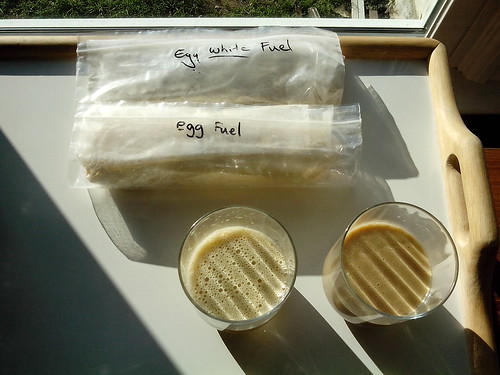 The foamy one on the left is the egg white.

Well, vegans are not the only picky eaters I’m trying to please. There’s also the Paleo constituency, who approve only of foods that were eaten before the invention of agriculture, and that rules out both rice (grains) and whey (dairy products). Darn.

So what can you eat, on a Paleo diet?

Well, mostly meat and veggies, with some fruit. Not exactly the most amenable to powdered form.

But eggs are Paleo too, right? You may not be able to milk a wild cow, back in the days before domestication, but you could imagine stealing an egg from a wild chicken. Maybe?

In any case, all of the Paleo gurus agree, eggs are definitely Paleo.

And you can turn them into powder! Powdered eggs. Perfect, right?

So what’s the catch? 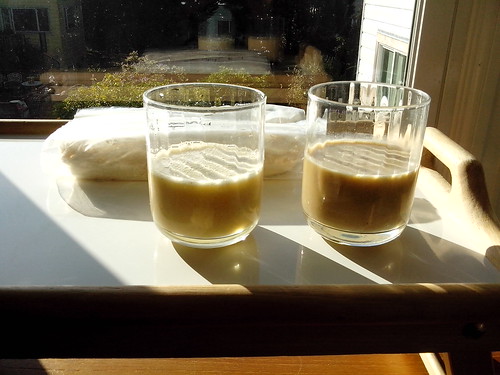 Well, there’s actually more than one catch – there are a lot of potential problems with eggs, especially the powdered kind. (Surprise!)

What do people usually complain about when it comes to eggs?

The answer is cholesterol. At 180mg each, egg yolks are one of the richest sources of cholesterol in existence, and most people don’t think of that as a good thing!

But Paleo eaters like to point out that natural, raw cholesterol is not the problem – in scientific studies, it’s actually oxidized cholesterol that is connected with increased risk of heart attacks and stroke. That is, cholesterol that has been cooked at high temperature, essentially, burning it as it reacts to the oxygen in the air. A boiled or poached egg is not going to have a lot of oxidized cholesterol, because it doesn’t get too hot and the cholesterol-laden yolk never gets directly exposed to the air. So naturally, poached eggs are a popular Paleo dish! But if you scramble them, you might get some oxidation.

Or, of course, if you turn them into powder with an industrial spray-dryer. You know, powdered eggs. High heat, extremely high surface area exposed to air – a perfect recipe for extensive oxidation.

Even the most liberal of Paleo gurus wouldn’t eat that!

All right. But that’s just the yolks, right? What if you just use the powdered egg whites? That’s where all the protein is, anyway.

Sounds pretty good. Egg protein is perfectly balanced and very bioavailable – in fact, the whole idea of the “biological value” of protein was based around the egg, giving it a perfect score of 100. Yay!

But wait – there’s a catch, right?

Of course there’s a catch! :D

Here’s the thing. You know why the Paleo diet forbids grains and legumes? It’s because those are the little baby seeds of plants, and to protect them against microbes and hungry animals, they’ve got a lot of biochemical defenses inside them like antinutrients that prevent absorption of certain vitamins and minerals, or lectins that can open up leaks in intestinal walls and bind blood cells together like a mischievous shoelace prank.

Guess what else is a little baby seed, defended by a minefield of lectins and antinutrients?

Eggs, of course! They can’t run away from predators, and they’ve got to survive for weeks without spoiling while the chick inside incubates and matures.

Kinda makes you wonder why Paleo makes such a big deal about grains and legumes when supposedly, eggs are totally fine. :p I guess the argument is that eggs are so rich in important and hard-to-find nutrients (like choline and biotin) that they’re worth the tradeoff, in the end. Or at least the yolks are – which is why some Paleo folks recommend only eating the yolks.

But still, egg whites have got plenty of avidin, along with other antinutrients, which will give you a biotin deficiency if you eat them raw every day, despite the yolks being an extremely rich source of biotin, ironically. But cooking at 185°F for a few minutes will deactivate most of it, fortunately. Cooking helps deactivate lectins as well.

Which may explain why Paleo is so happy to promote eating eggs. Most people will cook them before eating, Rocky notwithstanding.

So, egg white powder might actually be a decent source of Paleo protein, as long as it’s cooked sufficiently!

Which it’s not. Of course.

The egg powder (whole or whites) you can buy is not cooked. It’s pasteurized at a high enough temperature for a long enough time to kill salmonella, but low enough (130°F, perhaps?) that it does not denature the proteins – that is, cook them. People generally buy egg powder with the intention of cooking or baking them in another dish, so this is totally fine in most cases. But not for drinking it raw in a protein shake.

But let’s say you were able to find a manufacturer of powdered egg whites that does cook them for you, or maybe you want to buy a bunch of egg white powder and cook it yourself! (Sounds like my idea of a good time!) What other fun problems can you find?

Well, eggs are one of the most common food allergens out there, especially for kids – it’s second only to milk, among children. Fortunately, most people outgrow their egg allergy by the time they are adults, apparently, so that might still be an improvement over a soy or whey-based protein powder. But still, eggs are excluded in the even-more-restrictive Paleo variation called the Autoimmune Protocol, for the very same reason that gives eggs their heightened allergenic potential. So, it’s not ideal.

If you’re going to be getting a ton of eggs from somewhere, you can pretty sure that they’re coming from a factory farm, where each chicken spends its entire life boxed into a tiny wire cage so small that it can’t even move, until it is finally put out of its misery because it no longer produces eggs fast enough. It’s probably one of the worst examples of systemic animal cruelty you can find, and that’s saying something. The vegans would not be pleased. They might even bring pitchforks.

Those in the Paleo camp probably wouldn’t be too happy either. Paleo recommendations invariably emphasize the importance of choosing organic, cage-free eggs, or even better, local, pasture-raised eggs (because “cage-free” doesn’t mean the chickens ever see the sun). This is not only for ethical reasons, because eggs from healthy hens are more nutritious and less likely to be contaminated with bacteria or other harmful substances.

So. If you could get all your eggs exclusively from organic, pastured hens, dry them into a powder without oxidizing them, and cook them at high enough temperatures to denature the proteins in the whites without again oxidizing the cholesterol, you might actually have a pretty good Paleo protein source. At least, for those people without egg allergies, of course.

Know anyone who does that? I’d love to talk with them. But I could only imagine that their prices would make cricket powder look cheap. 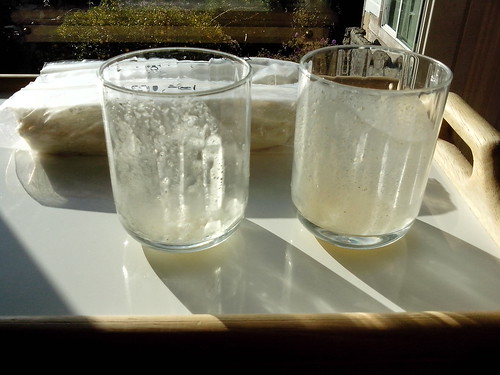 Hmmm. Not quite as good as I hoped. But not bad.

Oh, right – with all that talk about health drawbacks, I almost forgot.

Egg protein is supposed to taste pretty good – or pretty neutral, at least. That’s what the Amazon reviews say, anyway.

I tasted it. Both with whole egg powder (oxidized cholesterol and all!) and just the whites. I thought it was okay. Definitely not as neutral as I was expecting – I could definitely taste the egg. But I could see it working, especially with some vanilla or chocolate.

Surprisingly, though, I actually liked the whole egg version better. The flavor was more pleasant, for some reason, despite being more obviously egg-like. And the texture was much more smooth and rich – which is not surprising, given the emulsifying properties of egg yolks.

In the end, though, I couldn’t help thinking that egg white protein is just a more expensive, more problematic equivalent of whey protein, despite the Paleo ban on dairy and embracing of eggs. Once you take the yolk out of the equation, there are actually more problems with the eggs than the dairy, and no comparable benefits. And that’s kind of disappointing news.

But at least it’s led me to a less dogmatic take on the Paleo diet, and a more cynical view on health and nutrition claims of all sorts. Especially protein powder manufacturers. And that’s a good thing, right? :p

Well, maybe I’ll have a better answer with the next round of experiments. I hear that potato protein has a balanced amino acid profile, perhaps one of the best non-animal sources around…

Well. We’ll see about that.